Information Systems Specialist Chris O’Grady is a member of the development team for the Reconfigurable Cluster Element (RCE) initiative, headed by Mike Huffer, at the SLAC National Accelerator Laboratory at the University of Stanford. The RCE is cutting-edge technology which provides electronic data storage for extremely fast detectors. In fact, the detectors that the RCE reads out are so fast they can transmit snapshots at roughly 100 femtoseconds (a femtosecond is 10-15 or one quadrillionth of a second). 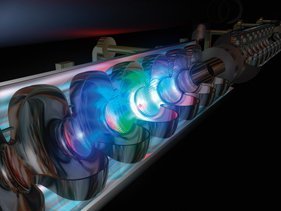 You might be wondering why anyone would need to take snapshots at such mindboggling speeds. SLAC National Accelerator Laboratory is home to the worlds longest linear accelerator, a whopping two-miles in length. The linear accelerator is best known for accelerating protons at close to light speeds and smashing them together in a colossal collision. The RCE modules record these collisions at miniscule time scales and allow scientists to dissect the results piece-by-piece.

One of Chris’ tasks is to perform proper bring up and validation of each RCE module. The task is no simple chore with the highly complex BGA circuitry involved. Until recently, Chris relied on his trusty oscilloscope to manually probe and debug problems. This was a time consuming and daunting task. On average, Chris spent two days of effort on each problem board.

With the RCE design gaining popularity in other applications beyond just proton smashing, his predicament was only going to grow. The technology is being considered for the Very Large Telescope (VLT) Array in Chilé, the Large Hadron Collider (LHC) at the CERN research center of the Swiss/French border, and the Large Synoptic Survey Telescope (LSST) in Chilé which will study Dark Matter and Dark Energy.

“Two days of troubleshooting per board is excessive, especially when highly skilled personnel need to be involved,” explained Chris. “When five boards are bad, two weeks of my time is tied up causing major delays on other projects. It simply got to a point where we needed to either reduce the debug time or assign the task to someone else.”

Reducing the debug time didn’t seem possible with his existing test process and assigning someone else meant finding and training a capable body. So Chris started investigating boundary-scan technology to help aid his problem. He initially purchased a low-cost tool, but quickly found out that it was not robust enough to solve his challenge. After weeks of little results and discouraged feelings, Chris consulted with Corelis to seek out a more elegant solution.

“The hardware controller on the low-cost tool was a major weakness,” claimed Chris. “Being aware of the issues, the first criteria we evaluated with Corelis was whether their hardware could meet our requirements. The Corelis hardware was surprisingly powerful. They were able to support multiple TAPs with a single piece of hardware and we were able to customize the interface voltage for each connector.”

With money already spent on boundary-scan tools, Chris was not about to throw more dollars at an alternative solution without seeing results first. Corelis confidently invited Chris to bring his test bench and boards to develop the boundary-scan test procedure. Corelis even assigned a dedicated application engineer to Chris during his visit, but Chris insisted on taking the driver seat during test procedure development even though he had no previous experience using the Corelis tools. In a couple hours, Chris had his test bench set up in the lab, wrote the complete test procedure, and successfully executed the test procedure on the RCE board.

“It turned out that the Corelis software was extremely user friendly and much more robust. Everything was very intuitive in how it worked. The program literally guided me from point A to point B.”

“The initial experience with our first JTAG tool made me skeptical that Corelis could deliver better results,” said Chris.

Chris anticipated being at Corelis at least a full day, but he was able to leave just after lunchtime feeling satisfied.

“The tools put me at ease,” continued Chris. “I literally was able to accomplish everything I planned on doing at Corelis in under four hours.”

Chris is also excited to know that his Corelis purchase will be put to good use for his next design project as well.

The Corelis software was extremely user friendly and much more robust. Everything was very intuitive in how it worked.”

“The tools put me at ease.”

“The Corelis tools have allowed me to recover lost time.”

The Corelis hardware was surprisingly powerful. They were able to support multiple TAPs with a single piece of hardware and we were able to customize the interface voltage of each connector.”