While it is obvious that JTAG based testing can be used in the production phase of a product, new developments and applications of the IEEE-1149.1 standard have enabled the use of JTAG in many other product life cycle phases. Specifically, JTAG technology is now applied to product design, prototype debugging and field service as depicted in Figure 1. This means the cost of the JTAG tools can be amortized over the entire product life cycle, not just the production phase.

To facilitate this product life cycle concept, JTAG tool vendors such as Corelis offer an integrated family of software and hardware solutions for all phases of a product’s life-cycle. All of these products are compatible with each other, thus protecting the user’s investment.

JTAG technology is the only cost-effective solution that can deal with the above problems. In recent years, the number of devices that include JTAG has grown dramatically. Almost every new microprocessor that is being introduced includes JTAG circuitry for testing and in-circuit emulation. Most of the CPLD and field programmable array (FPGA) manufacturers, such as Altera, Lattice and Xilinx, to mention a few, have incorporated JTAG logic into their components, including additional circuitry that uses the JTAG four-wire interface to program their devices in-system.

As the acceptance of JTAG as the main technology for interconnect testing and in-system programming (ISP) has increased, the various JTAG test and ISP tools have matured as well. The increased number of JTAG components and mature JTAG tools, as well as other factors that will be described later, provide engineers with the following benefits:

What JTAG Tools are Needed?

In the previous section, we listed many of the benefits that a designer enjoys when incorporating boundary-scan in his product development. In this section we describe the tools and design data needed to develop JTAG test procedures and patterns for ISP, followed by a description of how to test and program a board. We use a typical board as an illustration for the various JTAG test functions needed. A block diagram of such a board is depicted in Figure 2. 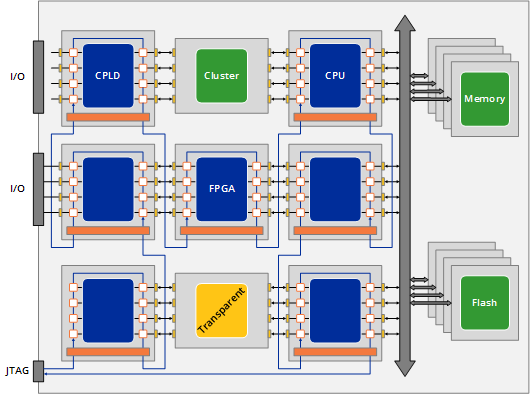 Figure 2.
Typical Board with JTAG Components

A typical digital board with JTAG devices includes the following main components:

Most of the boundary-scan test systems are comprised of two basic elements: Test Program Generation and Test Execution. Generally, a Test Program Generator (TPG) requires the netlist of the Unit Under Test (UUT) and the BSDL files of the JTAG components. The TPG automatically generates test patterns that allow fault detection and isolation for all JTAG testable nets of the PCB. A good TPG can be used to create a thorough test pattern for a wide range of designs. For example, ScanExpress TPG typically achieves net coverage of more than 60%, even though the majority of the PCB designs are not optimized for boundary-scan testing. The TPG also creates test vectors to detect faults on the pins of non-scannable components, such as clusters and memories that are surrounded by scannable devices.

Some TPGs also generate a test coverage report that allows the user to focus on the non-testable nets and determine what additional means are needed to increase the test coverage.

Test programs are generated in seconds. For example, when Corelis ScanExpress TPG™ was used, it took a 3.0 GHz Pentium 4 PC 23 seconds to generate an interconnect test for a UUT with 5,638 nets (with 19,910 pins). This generation time includes netlist and all other input files processing as well as test pattern file generation.

Test execution tools from various vendors provide means for executing JTAG tests and performing in-system programming in a pre-planned specific order, called a test plan. Test vectors files, which have been generated using the TPG, are automatically applied to the UUT and the results are compared to the expected values. In case of a detected fault, the system diagnoses the fault and lists the failures as depicted in Figure 5. Figure 5 shows the main window of the Corelis test execution tool, ScanExpress Runner™. ScanExpress Runner gives the user an overview of all test steps and the results of executed tests. These results are displayed both for individual tests as well as for the total test runs executed. ScanExpress Runner provides the ability to add or delete various test steps from a test plan, or re-arrange the order of the test steps in a plan. Tests can also be enabled or disabled and the test execution can be stopped upon the failure of any particular test.

Different test plans may be constructed for different UUTs. Tests within a test plan may be re-ordered, enabled or disabled, and unlimited different tests can be combined into a test plan. ScanExpress Runner can be used to develop a test sequence or test plan from various independent sub-tests. These sub-tests can then be executed sequentially as many times as specified or continuously if desired. A sub-test can also program CPLDs and flash memories. For ISP, other formats, such as SVF, JAM, and STAPL, are also supported.

To test the board depicted in Figure 2, the user must execute a test plan that consists of various test steps as shown in Figure 3. 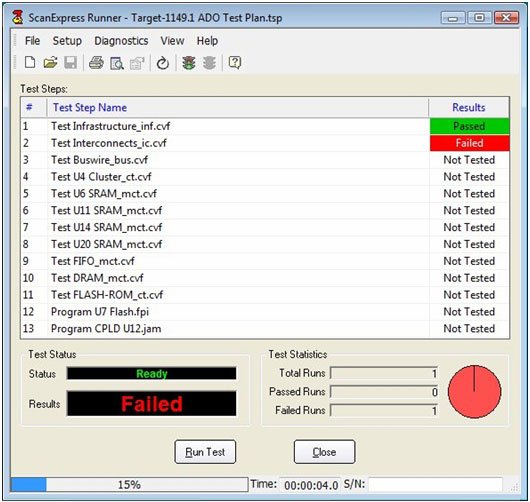 The first and most important test is the scan chain infrastructure integrity test. The scan chain must work correctly prior to proceeding to other tests and ISP. Following a successful test of the scan chain, the user can proceed to testing all the interconnections between the JTAG components. If the interconnect test fails, ScanExpress Runner displays a diagnostic screen that identifies the type of failure (such as stuck-at, Bridge, Open) and lists the failing nets and pins as shown in Figure 3. Once the interconnect test passes, including the testing of transparent components, it makes sense to continue testing the clusters and the memory devices. At this stage, the system is ready for in-system programming, which typically takes more time as compared to testing. 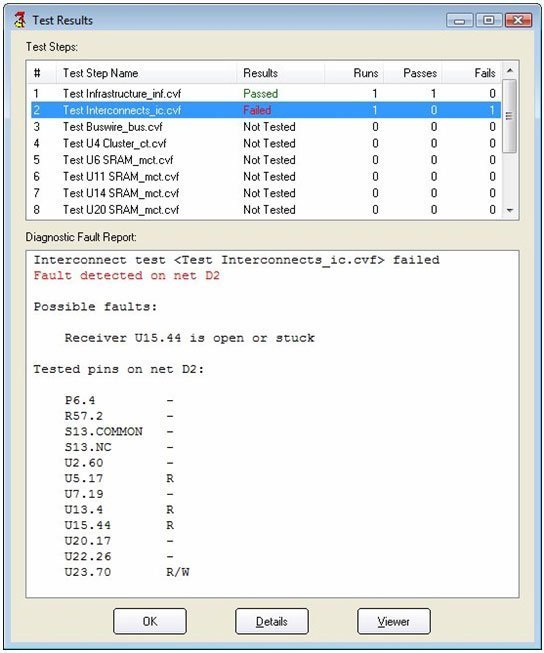 During the design phase of a product, some JTAG vendors will provide design assistance in selecting JTAG-compliant components, work with the developers to ensure that the proper BSDL files are used, and provide advice in designing the product for testability.

Production testing, utilizing traditional In-Circuit Testers that do not have JTAG features installed, experience similar problems that the product developer had and more:

Recently, a test methodology has been developed which combines the ease-of-use and low cost of boundary-scan with the coverage and security of traditional functional testing. This new technique, called JTAG Emulation Test (JET), lets engineers automatically develop PCB functional test that can be run at full speed., If the PCB has an on-board processor with a JTAG port (common, even if the processor doesn’t support boundary-scan), JET and boundary-scan tests can be executed as part of the same test plan to provide extended fault coverage to further complement or replace ICT testing.

In the first two cases, the test flow is sometimes augmented with a separate ICT stage after the JTAG-based testing is completed, although it is becoming more common for ICT to be skipped altogether or at least to be limited to analog or special purpose functional testing.

The following are major benefits in using JTAG test and in-system programming in production:

Production test is an obvious area in which the use of boundary-scan yields tremendous returns. Automatic test program generation and fault diagnostics using JTAG software products and the lack of expensive fixturing requirements can make the entire test process very economical. For products that contain edge connectors and digital interfaces that are not visible from the boundary-scan chain, JTAG vendors offer a family of boundary-scan controllable I/Os that provide a low cost alternative to expensive digital pin electronics.

The role of JTAG does not end when a product ships. Periodic software and hardware updates can be performed remotely using the boundary-scan chain as a non-intrusive access mechanism. This allows flash updates and reprogramming of programmable logic, for example. Service centers that normally would not want to invest in special equipment to support a product now have an option of using a standard PC or laptop for JTAG testing. A simple PC-based JTAG controller can be used for all of the above tasks and also double as a fault diagnostic system, using the same test vectors that were developed during the design and production phase. This concept can be taken one step further by allowing an embedded processor access to the boundary-scan chain. This allows diagnostics and fault isolation to be performed by the embedded processor. The same diagnostic routines can be run as part of a power-on self-test procedure.

As mentioned earlier in this article, the design for JTAG test guidelines are simple to understand and follow compared to other traditional test requirements. It is important to remember that JTAG testing is most successful when the design and test engineering teams work together to ensure that testability is “designed in” from the start. The boundary-scan chain is the most critical part of JTAG implementations. When that is properly implemented, improved testability inevitably follows.

Below is a list of basic guidelines to observe when designing a JTAG-testable board: