While originally developed to address the needs of testing printed circuit board assembly (PCBA) interconnects, JTAG test methods can be used to address many needs beyond simple structural test. This overview will briefly examine popular types of JTAG tests and applications. 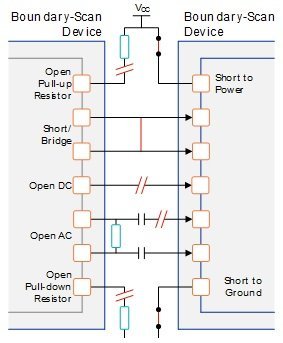 Most JTAG/boundary-scan systems are composed of two main components: a test program generator for test development and creation, and a test program executive for running tests and reporting results.

Test program generators accept computer aided design (CAD) data as input in the form of a netlist, bill of materials, schematic, and layout information. The test program generator (TPG) uses the information provided in these files, along with guidance from the test developer, to automatically create test patterns for fault detection and isolation using JTAG-testable nets on the PCB. Full-featured test program generation software will generally also include the capability to automatically generate tests for non-scannable components including logic clusters and memories that are connected to boundary-scan devices. A sample of faults that can be detected with automatically generated tests is shown in Figure 1.

Test program executives are used to run the tests created by the test program generation software. The test executive interfaces with the JTAG hardware to execute test patterns on a unit under test (UUT), then compares the results with expected values and attempts to diagnose any failures. Modern test executives include advanced features such as flow control, support for third party test types, and often include an application programming interface (API) for integration with additional test systems or development of simplified operator interfaces.

The continuous drive toward higher density interconnects and finer pitch ball-grid-array (BGA) components has fueled the need for test strategies that minimize the number of test points required. By embedding the test logic within the IC itself and limiting the physical interface to just a few signals, JTAG/boundary-scan presents an elegant solution to testing, debugging, and diagnosing modern electronic systems.

Today, JTAG provides the access mechanism for a variety of different system operations. Just some of the benefits provided by JTAG are:

Reuse through the product life cycle. The simple access mechanism provided by the JTAG TAP can be used at all stages of the product lifecycle—from benchtop prototype debugging to high volume manufacturing and even in the field.

Independent observation and control. Boundary-scan tests operate independently of the system logic, meaning they can be used to diagnose systems that may not operate functionally.

Extensibility. JTAG has seen continuous development and new applications are frequently being discovered. Additional standards have been developed to address AC-coupled testing, reduced pin counts, and control of test instruments embedded within ICs.

JTAG testing usually begins by checking the underlying infrastructure to ensure that all devices are connected and test capabilities are operational. Test patterns are used to exercise the instruction register and boundary-scan register for comparison against expected lengths and values. If present, device ID codes can also be read and compared against expected values to ensure that the correct component has been placed.

After verifying that the scan chain is working properly, test patterns can be used to verify interconnectivity between system components. Nets that involve three or more boundary-scan pins represent a special case, called a bus wire, where additional patterns can be used to isolate faults to a specific pin, as shown in Figure 2. During a buswire test, boundary-scan driver pins are tested one at a time to ensure that all possible opens are tested.

Figure 2.
A buswire test can be used to
diagnose open faults at the pin level.

Devices that are transparent to DC signals can be modeled as “short” signal paths and included in the test; for example, series resistors can be tested for component presence and open faults, while directional buffers can be constrained and tested to ensure that signals sampled at the buffer output pins match the signals that are applied to the buffer input pins. Additionally, tests for AC-coupled signals can be integrated with interconnect and buswire tests in systems with IEEE-1149.6 standard components, allowing capacitors to be tested for AC signal transparency.

Special tests can also be used to check pull-up and pull-down resistors, ensuring that resistors are present in the assembled system in addition to testing the nets for open and short faults. To accomplish this, resistors are tested by first driving the signal to a state opposite the pulled value. The net is then tri-stated, allowing the resistor to pull the signal back to the original state. Finally, the signal is sampled and the value is compared to the expected pulled value.

A common application of a cluster tests uses the storage capability of RAM devices to verify interconnects between a boundary-scan device and a connected memory. Using a model of the memory component, tests can be automatically created to write specific data patterns to memory addresses and then read back and compared against the expected value. These patterns are designed to ensure that all memory data and address signals are driven to both high and low logic states. The same concept used to test RAM can also be applied to non-volatile memory, such as flash, EEPROM, and NVRAM components.

While JTAG/boundary-scan was originally regarded as a method to test electronic products during the production phase, new developments and applications of the IEEE-1149.1 standard have enabled the use of JTAG in many other product life cycle phases. Boundary-scan technology is commonly applied to product design, prototype debugging, and field service.

The same test suite used to validate design testability can adapted and utilized for board bring-up, high-volume manufacturing test, troubleshooting and repairs, and even field service and reprogramming. The versatility of JTAG/boundary-scan tools delivers immense value to organizations beyond the production phase. 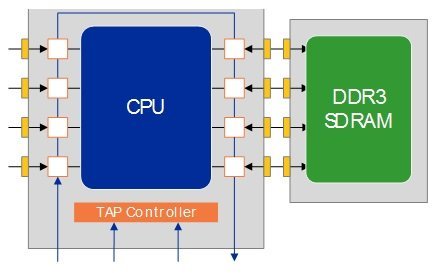 Many modern processors use JTAG as the main interface for on-chip debugging (OCD), allowing the processor to be controlled over the JTAG port within an embedded system.

Using this same interface, the JTAG port can be used to initialize a processor, download and run a test program, and then obtain results; this test technique is a fast, convenient method for developing and executing peripheral tests and in-system-programming operations in embedded systems.

Because these tests run at the system processor speed, defects that may not be identified during low-speed execution can be detected.

In addition to test applications, JTAG is also frequently used as the primary method to program devices such as flash memory and CPLDs. To program flash devices, the pins of a connected boundary-scan-compatible component can be used to control the memory and erase, program, and verify the component using the boundary-scan chain. FPGA and CPLD devices that support IEEE-1532 standard instructions can be accessed and programmed directly using the JTAG port.

Faster performance can be achieved using a CPU or FPGA to program the flash. In these cases, a small flash programming application is downloaded to the controlling device over the JTAG port, which is then used to interface between the test system and the flash programming application running on the embedded system.  The program can run at much higher speeds than boundary-scan, increasing production throughput and rivaling or surpassing the speeds of USB and Ethernet-based programming solutions, without requiring an operating system or high-level software be present on the embedded system.

The IEEE-1149.1 JTAG team had the foresight to design an extensible standard—one that could employ additional data registers for many different applications. As a result, JTAG has grown from its original roots for board testing into a ubiquitous port that can be used for diverse applications such as in-system-programming, on-chip debugging, and more recently control of instruments embedded within ICs. 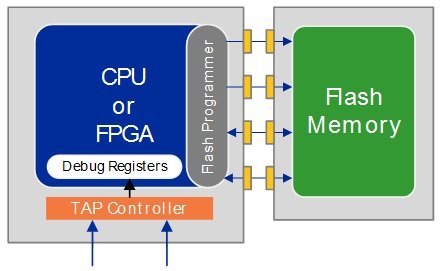 Figure 4.
A CPU or FPGA under JTAG control can be used to program flash memory