Boundary-scan has proven itself time and again to be a versatile interface for structural test, embedded functional test, built-in self test (BIST), software debug, and in-system programming. Supporting such diverse applications requires a controller with high performance specifications and extended features.

The Corelis PCIe-1149.1 is a high-performance boundary-scan controller for multi-TAP (Test Access Port) and concurrent JTAG test and in-system programming. When combined with a ScanTAP™ intelligent pod, the PCIe-1149.1 offers up to 80 MHz clock rates on 4, 8, or 32 TAPs with features such as external write strobe, direct programming, and analog voltage measurement. 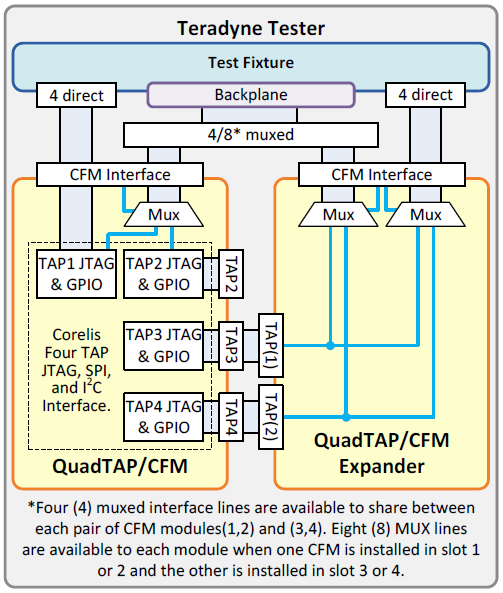 The Corelis QuadTAP/CFM JTAG controller is compliant with the IEEE Standard 1149.1 for test access and is fully capable of executing 1149.1 and 1149.6 tests. The QuadTAP/CFM provides support for up to two TAPs with a single unit or up to four TAPs using QuadTAP/CFM Expander cards. Integrated SPI and I²C programming features on each TAP make the QuadTAP/CFM an ideal and universal solution for combined boundary-scan, JTAG embedded test, and ISP.

The QuadTAP/CFM system was designed specifically for use with Teradyne TestStation and GR228x series Testers. Each board fits directly into one of four CFM slots on a Teradyne Multi- Function Application Board, offering versatility for up to four TAPs. The JTAG, GPIO, I²C, and SPI signals from the installed modules are available directly to test fixtures and the tester backplane.

Request Help
Top Do NOT follow this link or you will be banned from the site!
Request Technical Support
Thanks for reaching out!