Combine Multiple Assembly Test Files Corelis ScanExpress Merge, a member of the ScanExpress suite of boundaryscan test tools, is a software application designed to import and join test files for multiple independent assemblies and assist in configuration of a combined test procedure.

Now boundary-scan tests can be easily extended to test systems that consist of multiple PCBs, multi-chip modules, or coverage extending IO modules— treating them as a single, combined unit for cohesive, complete, and convenient system-level testing. 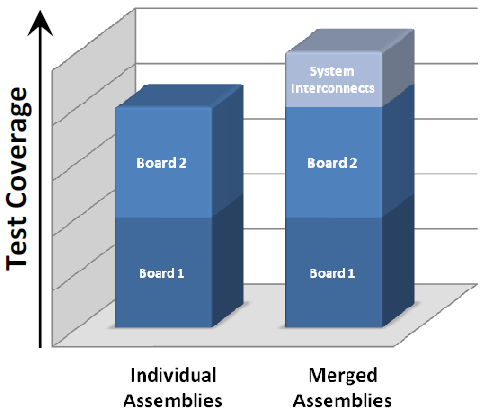 ScanExpress Merge automates the process of developing tests for systems that include connections to DIMM memory sockets, PCI slots, and ScanIO connectors. ScanExpress Merge combines the data of the board and the data of the ScanIO, ScanPCI, and ScanDIMM parallel IO modules into a single set of input files for use with the ScanExpress TPG intelligent test pattern generator software. The process is completely automated to save time—no need to manually describe the connections between the PCB connectors and the modules.

Hierarchical & Modular Systems are tested as individual components or as a whole with the system assembled.

Connector Tests are easily added to any project with ScanDIMM, ScanPCI, and ScanIO modules to increase boundary-scan test coverage.